Is Your Yeezy Fake or Real? (Legit Check Ultimate Guide!)

In recent years, Yeezy sneakers have become one of the most popular and sort-after shoes in the world and among sneaker enthusiasts. Unfortunately, scam artist and fake product have overtaken online and offline stores because of the increasing craze to own a Yeezy. But amidst the many fakes available on the market, how do you find the real Yeezy sneakers? And if you already own one, is your Yeezy fake or real? In this article, I am going to show you the legit check ultimate guide.
NOTE: This is a general guide to spot fake Yeezy and mostly the "Yeezy Boost" model. If you're looking for more detailed info on how to spot fake for any specific Yeezy release/model, you should head to my Yeezy releases page.

Stitching in the Heel 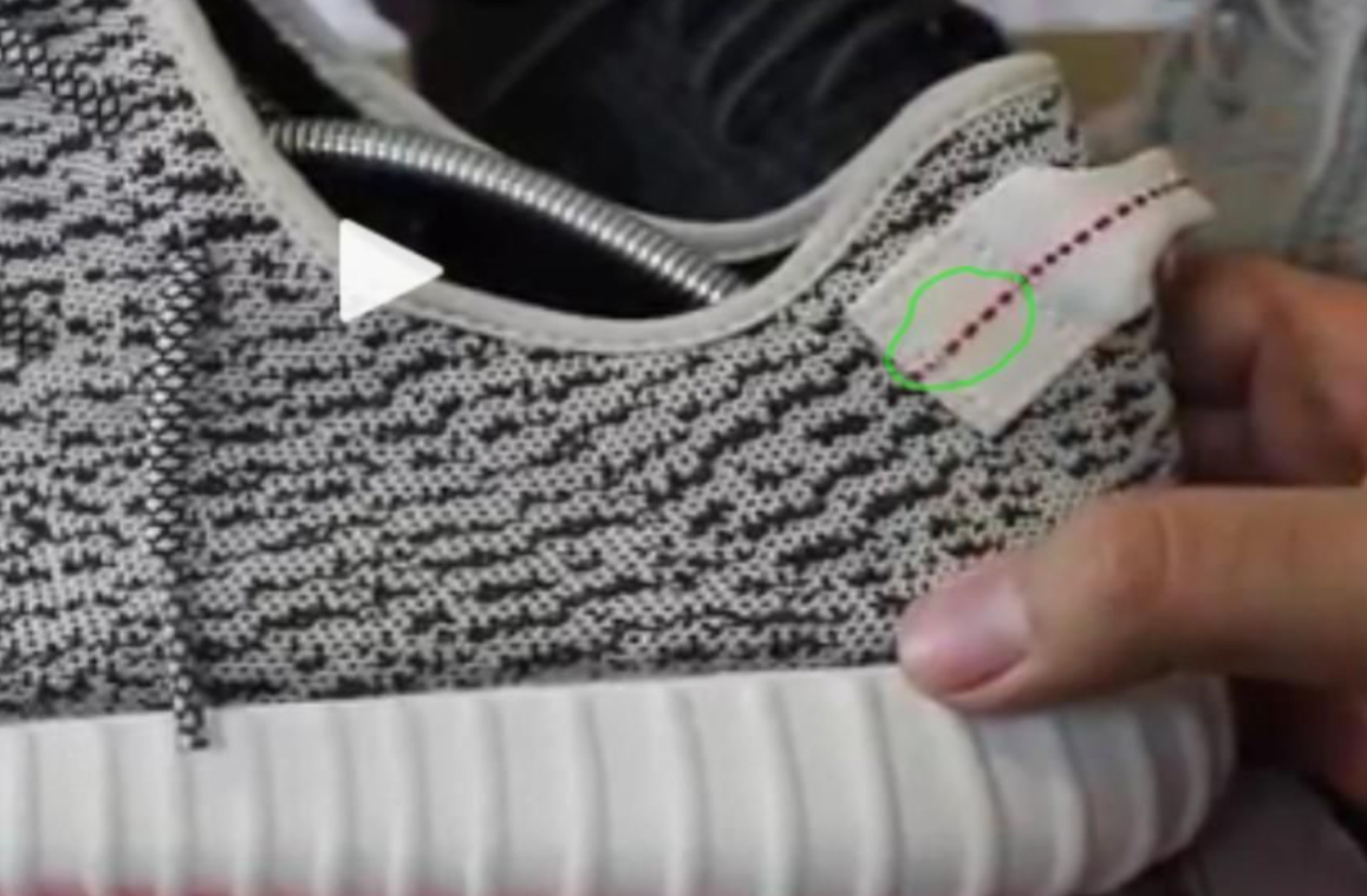 You would notice the stitching pattern within the area circled in green on the heel-tab. If you count the number of stitches in red, you will see it is six with the sixth one falling outside. The same thing is on the other side of the sneaker. If your pair of Yeezy sneakers has that number, then you are holding the real shoe. But if you see that the number of stitches within the circled part in the heel is less than six, chances are you holding the fake Yeezy. 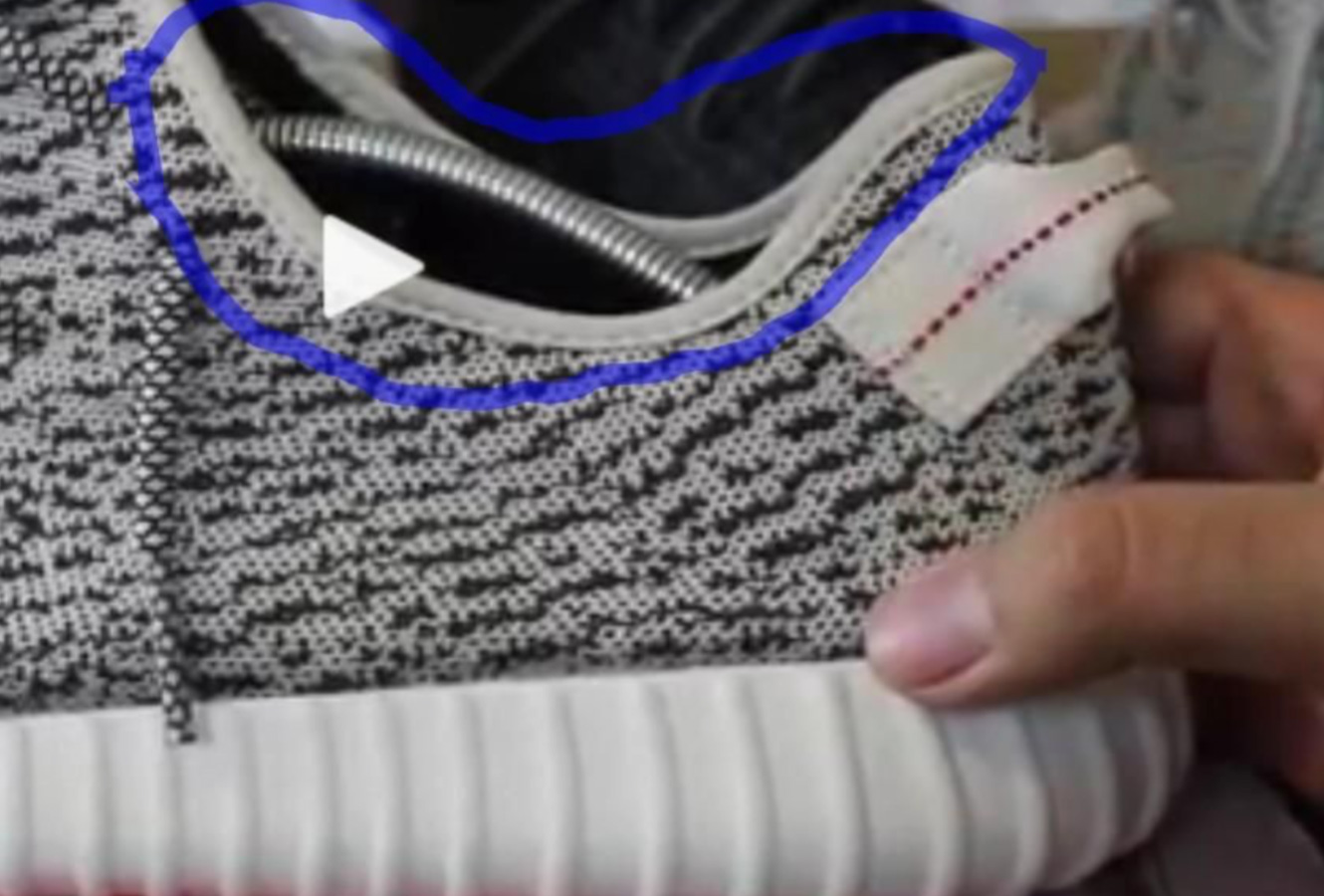 The liner of Yeezy sneakers does not shine at all. They are just going to look like a regular sock liner. I have seen lots of Yeezy shoes with shinning liners online. It is advisable you don’t go for those because you might be dealing with a counterfeit. Also, you have to be careful not to buy the one with wider liners. If you see one having a wider liner compared to those on the Adidas official website, don’t go for it. 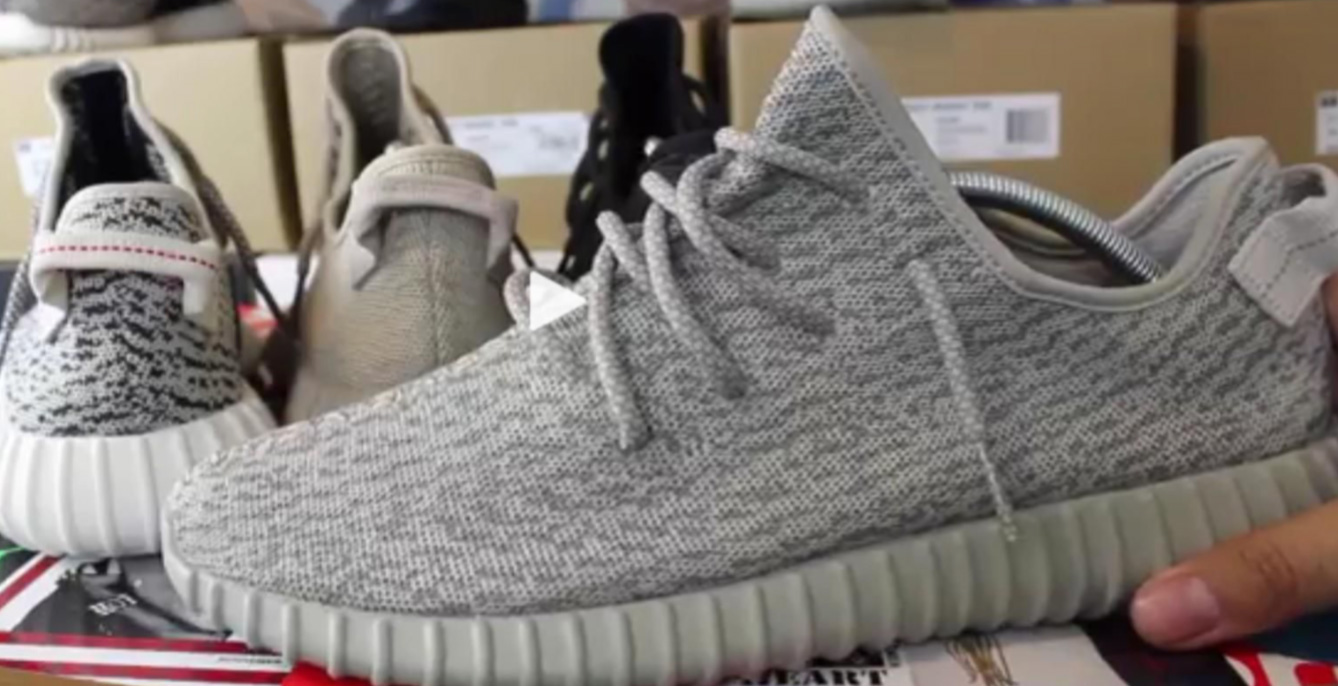 If you check the pattern at the back and see a sporadic arrangement that does not lead anywhere, then you are holding the real shoe. In lots of fakes, you would notice the patterns meeting each other at the back. Also, for real Yeezy, the pattern on the side and at the top does not appear to go straight but in a dipping direction with some lines crossing them. If you see anything contrary to this, chances are you are holding or seeing a fake. 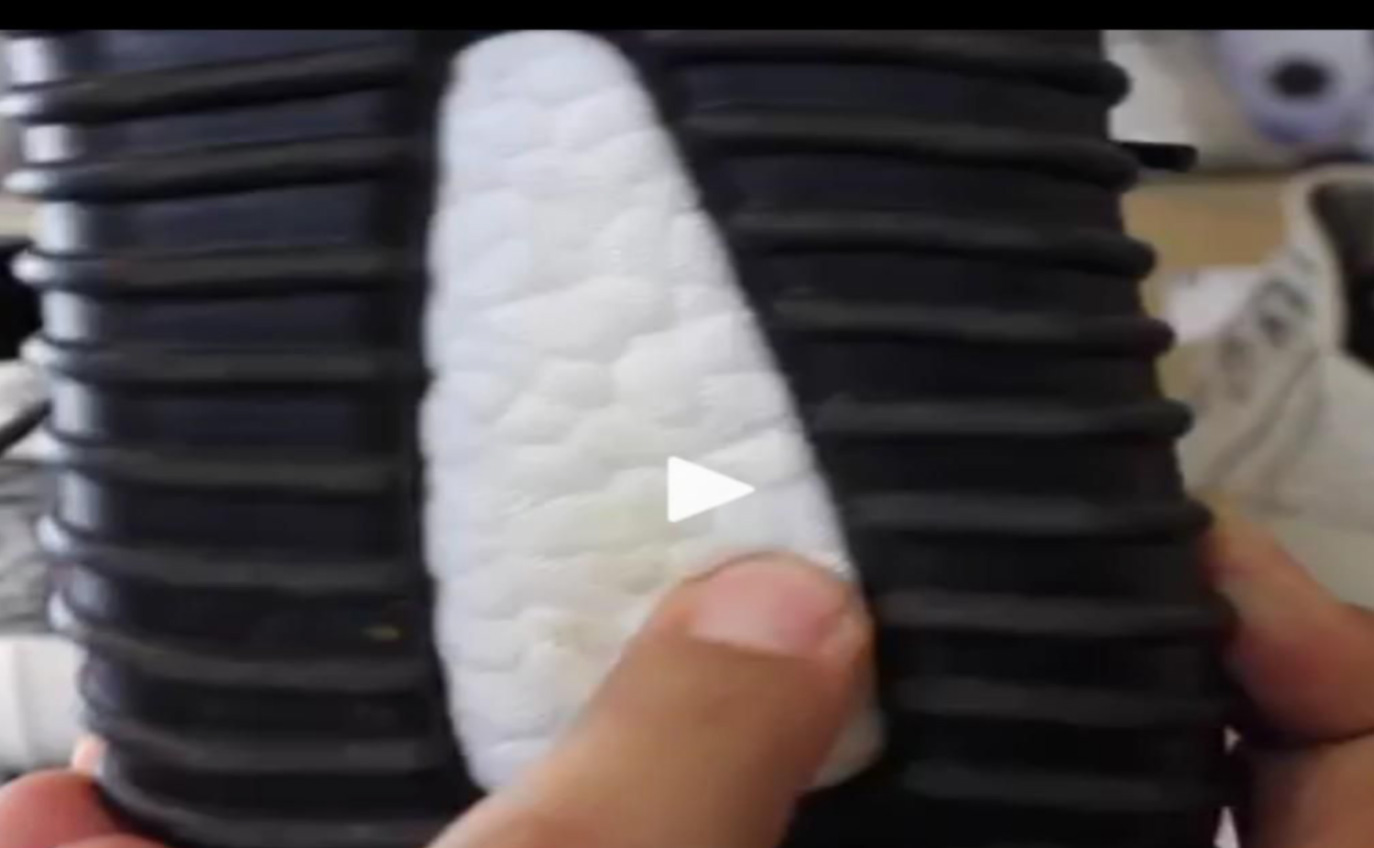 One of the best and easiest ways of knowing if a Yeezy shoe is authentic or counterfeit is by checking the Boost at the bottom of the shoe. The real pairs have supper soft Boost while the fake has rigid boosts. The real Yeezy has Boost with a slight texture that does not shine excessively. Also, in fakes, the Boost appears wider, but the real shoes have moderate size Boost.

Many people think checking the insole is not essential, but it is. Though it is one of the difficult ways to check if your pair of shoe is real or fake, the insole is still a good thing to watch out for. From the images above, the spaces between the logo, Adidas, and Yeezy written on the upper part of the insole is consistent. So if you see that the one you are buying looks fairly spaced, kindly run from it.

Secondly, when you check underside the insole, you will see there are patterns on it. Most fakes don’t have patterns on them. Also, the Adidas logo should not bulge out. It should be flat. Any contrary feature is a sign you are holding a fake. 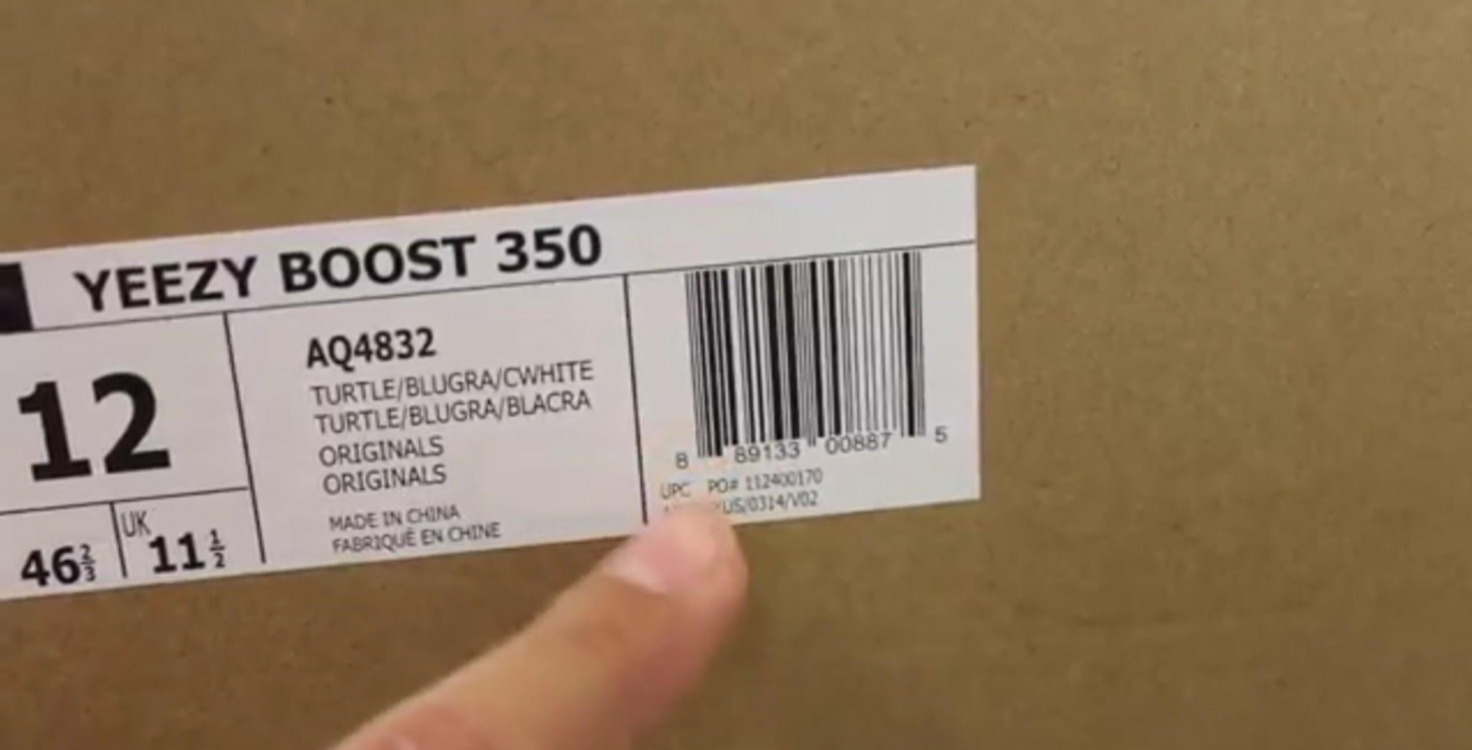 The box is one of the best ways to know if a pair of shoe is fake or genuine. It is the first thing you notice when you purchase your Yeezy sneakers. Even though fake products are also improving to make the shoe look real, there are many things they still don’t get right in the shoe box.

From the image above, there is a PO# number where the finger is pointed. For you to tell if the sneaker is legit, the PO# number must match the number on the tag inside the shoe. Any deviation is a no-no. In short, always make sure the UPC and style codes match up.


Where can you buy authentic Yeezy?

So you see, spotting a fake Yeezy is easy and simple. It only takes constant practice. If you can pay attention to everything I have mentioned in this article, you would not have a problem differentiating the real Yeezy from the counterfeit. But if you still need help, you can always contact me!

Hey there! My name is Josh and I'm a sneakerhead. I also love to blog on my spare time! I made this website as a guide/resource for all your Yeezy related needs (Yeezy is one my favorite sneaker brand!). You can contact me if you need any help or feedback.